The motorcycle museum at the Timmelsjoch toll station has burned down completely.

The fire broke out on January 18, 2021 early in the morning.
The fire brigade was informed around 4 a.m. that smoke was leaking from the building.
When the fire brigade arrived, the false ceiling was on fire, and within a few minutes the entire museum was on fire.
The firefighters were able to prevent the flames from spreading to the cable car and the adjacent restaurant. But the museum itself could not be saved.
The museum with the historic motorcycles is likely to be a total loss.
The cause of the fire was a technical defect at a presentation monitor in the area of the museum’s exhibition area.
The motorcycle museum on the Timmelsjoch showed around 230 historic motorcycles and some cars on an area of 3,000 square meters. 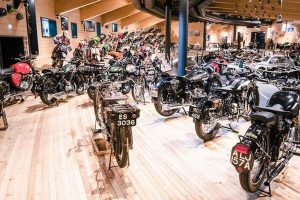 The exhibition house was built in 2016 by the brothers Alban and Attila Scheiber and was largely made of wood.
According to the current status, around 200 of the exhibits were destroyed in the fire. The damage goes into the millions.

It was such a great museum. We will miss it so much!

How the fire will affect the start of the season, which usually starts at the beginning of June, is also still uncertain, as the toll station for the Timmelsjoch High Alpine Road burned down with the museum.

Your World On Two Wheels

Find awesome listings near you!